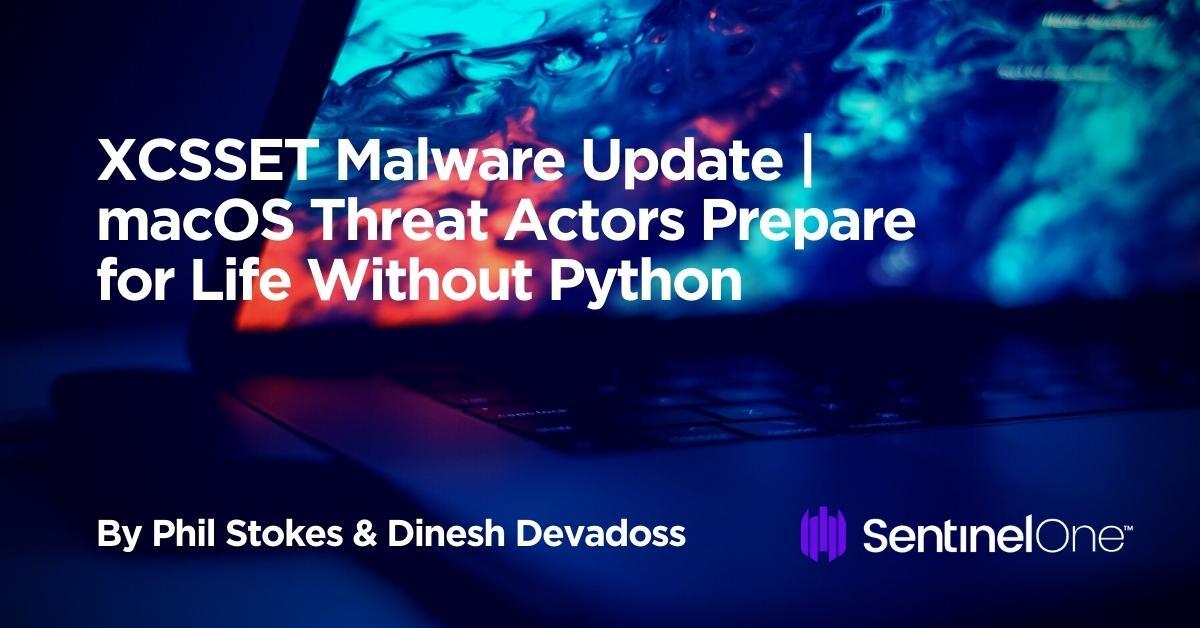 Threat actors behind the XCSSET malware have been relatively quiet since last year, but new activity beginning around April 2022 and increasing through May to August of this year shows the actors have not only adapted to changes in macOS Monterey but are preparing for the demise of Python, an integral and essential part of their current toolkit.

In this post, we review changes made to the latest versions of XCSSET and reveal some of the context in which these threat actors operate.

Since XCSSSET first appeared, the authors have made consistent use of two primary tools to obfuscate both droppers and dropped files: SHC and run-only compiled AppleScripts, respectively.

As all SHC-compiled binaries, legitimate or malicious, contain these same strings, signature scanners cannot distinguish between them.

Dynamic execution of this recent SHC-compiled XCSSET dropper, currently with 0 detections on VirusTotal despite having been known for 2 months, also reveals that the malware authors have changed tactics from hiding the primary executable in a fake Xcode.app in the initial versions in 2020 to a fake Mail.app in 2021 and now to a fake Notes.app in 2022. These fake apps are invariably dropped in a parent folder created in random locations in the user’s Library folder. When executed, this particular sample writes the fake Notes.app to:

The updated run-only AppleScripts that XCSSET drops as second-stage payloads use a collection of newly-registered domains:

Changes in the replicator.applescript file, which infects users’ Xcode projects with the XCSSET malware, show that both curl’s –max-time value and the script’s phaseName variable have now been randomized, presumably to hamper static detection or hunting rules.

The –max-time option is now set to a random value between 5 and 9, while phaseName is chosen from the following list:

In the previous version of XCSSET, the malware created and dropped files for its own caches and control functions in a folder at ~/Library/Caches/GeoServices/. This has been modified slightly to “GitServices”.

Persistence plists are currently chosen from the following list:

and target a file at:

As previously, XCSSET continues to attempt to evade detection by masquerading as either system software or the almost ubiquitous Google and Chrome browser software.

As noted, XCSSET makes use of a fake Notes.app to hide the primary run-only compiled a.scpt.

The SHC-compiled dropper script defines several random paths to use as parent directories for the fake Notes.app.

The script remains in essence the same as earlier versions except that the encoding handler has changed from one previously shared with OSAMiner.

Aside from a.scpt, XCSSET makes use of multiple run-only AppleScripts. Although these scripts are written to disk as compiled and run-only, we were able to capture the scripts in plain text on the wire. In the updated version of XCSSET, these continue to target Telegram and other chat apps heavily in use by Chinese users such as WeChat and Tencent’s 360, along with an expanded list of browsers, including Opera, Brave, Edge and other Chromium-based browsers.

Many of the scripts shown above share the same structure and list of handlers but make minor changes to handle the specifics of each target application.

The contacts.applescript has the role of targeting various chat apps from which to steal and exfiltrate data.

Among other tasks, the payloader.applescript checks for AppleBackLightDisplay, presumably to distinguish between laptops and desktops. This info is part of what is exfiltrated, showing that the threat actors are keen to gather very precise hardware profiling information.

Similarly, the threat actors are interested in exactly how up-to-date the victim is with Apple’s XProtect and MRT malware removal tool, presumably all the better to target them with more effective payloads. The listing.applescript script is used for this purpose.

Also of interest is the use of the public service transfer.sh for exfiltrating data files that are too large for the attacker’s server.

XCSSET Changes for Monterey and Python

One of the more interesting things we noted in recent samples of XCSSET is the developer’s awareness of OS versions and the clear intent that the authors are here for the long run.

Right from its initial version, XCSSET made use of python scripts for certain functions, in particular for dropping fake application icons on the Dock. It achieved this by abusing a public Github repo called DockUtil. In the latest version, we also note that XCSSET uses python to parse and steal data from the user’s (legitimate) Notes.app. For this functionality, they use a modified version of a plugin from a legitimate python-based tool called mac_apt used by macOS forensics experts.

XCSSET’s authors have updated their AppleScripts to account for Apple’s recent removal of python 2. The following image shows how the malware authors updated their safari_remote.applescript for python3 and Monterey 12.3 and above.

Similarly, the comment in edge_remote.applescript shows that the authors are keenly aware that DockUtil and other utilities will need to be replaced in their toolkit in the near future.

While very little is publicly known about the actors behind XCSSET, their motivations or their exact targets, the actors have engaged with journalists and security researchers at times. The original version of XCCSET, which appeared in August 2020, contained the full names of two individuals. Subsequently, a Twitter account with the name ‘Hans’ briefly became active and sent private messages to a journalist, claiming that he was the real author and not the two individuals whose names appeared in the malware code. The same individual claimed that the targets were “developers from China” and “big gambling business”

‘Hans’ subsequently disappeared from view, but about a year later another Twitter account in the name of ‘Vlad F’ began reaching out to researchers, complaining that they had been falsely accused of being the actors behind the malware.

While Apple, stoically, refused to comment on these claims at the time, Vlad F’s Twitter account ceased to respond. Earlier this year, however, Chinese users reported XCSSET infections and attempts to unlock stolen “accounts” from victims in return for “200 USDT” (a so-called “stable” bitcoin belonging to Tether).

Meanwhile, other researchers have noticed that older versions of XCSSET have been found embedded in a number of Github repositories.

It seems a new trojan is going around and affecting @Apple #iOS builds. I don&#39;t know the original method of infection, but I&#39;m starting to see some public repos on GitHub being affectedhttps://t.co/EmutE0jCbD

At this point in time, it’s unclear whether these infected repos are victims or plants by threat actors hoping to infect unwary users. It has been suggested that unsuspecting users may be pointed to the infected repositories through tutorials and screencasts for novice developers. Our research into XCSSET and its infection vectors continues.

XCSSET has many moving parts, and samples change rapidly. While some static signatures such as those used in Apple’s XProtect service will detect known samples, full protection against evolving threats like these is only really possible with a multi-engine agent including behavioral AI.

With the agent policy set to ‘Protect’, the malware is prevented from executing or dropping any of its components. For this demonstration, we set the policy to ‘Detect-only’ in order to observe further stage payloads.